Forsiden  / Nyheter / Arkiv 2019 / Visit from School of Peace in Ukraina

Visit from School of Peace in Ukraina 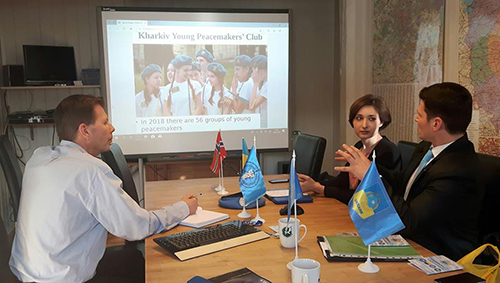 I had the privilege to host and escort two very dedicated Ukrainian friends from Hamburg to Norway and back. Serg Samoylov and Nadiia Shulzhenko both work devotedly and professionally with different projects, teaching our younger generation in the spirit of peace, on the basis of human dignity and rights.

Serg is a co-founder and a leader of School of Peace, as far as of Young Peacemakers’ Movement in Kharkiv/Ukraine. In Kharkiv, volunteers, youth and veterans (Blue Beret/UN) meet and interact on several occasions in the course of the year, for the benefit of inspiring, creating and keeping peace in Europe.
Nadiia is engaged in different civil cultural and humanitarian projects (helping orphanages, hospitals, event management etc) in the field of humanistic communication and gender questions.
Some projects have already been taken place in France as well in the DR Congo. Serg and I have already met a few times during the Blue Berets (UN) international meetings, and we discovered that our aims in Norway (Active Peace Travel) and in Ukraine (School of Peace), despite of course some different concepts, have much in common and the same objective: teaching younger generation and pupils about human rights through different activities, and bringing eyewitnesses to conflicts and war, to tell their experiences. Norway is "far away" for Ukraine, and this trip was their first visit to Scandinavia.

First day was an 11 hour drive from Hamburg/Kiel through Denmark, incl a 4 hour ferry connection from Denmark to Kristiansand in Norway.
Nightover at Revsnes hotel (belonging to Active Peace Travel) before a short drive to Landeskogen Peace Center (belonging to Active Peace Travel) in Byglandsfjord. This fantastic 100 year old former hospital building in the beautiful nature, already has everything on the spot for international groups of youth to socialize, play, interact, and be inspired of peace work. Two dedicated employees of Active Peace Travel did a very fine job to show us all the rooms in the Center, as well as the outside facilities with the famous nature park of Norwegian Mooses. 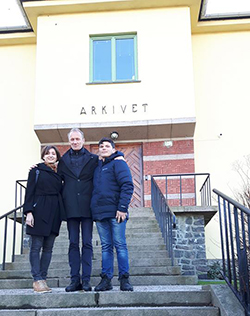 In the afternoon of the same day, we drove back and had an appointment in Arkivet Human Right Center in Kristiansand. It was built in 1935 to host the documentation (proprietes of ground and infrastructure belonging to the State in Southern Norway), but in 1940 was taken over by the German police (Gestapo). This house quickly got the reputation of a place where the toughest interrogations and tortures were inflicted to Norwegian resistance movement participants during the 5 years of war,

and consequently thousands of individuals were sent to KZ camps in Germany.

Today Arkivet is a museum and a site of memory and remembrance of those who suffered and lost their lives under a national fascist political system. It also constitutes a strong historical evidence not to forget who the offenders were, and how normal and educated people took part in such violent actions towards mankind.
A new part of Arkivet is built to host the Human Right Center and the UN Center. Both Centers and the Museum interactively work together, and also have educational projects with the local university of Kristiansand.
Our guide on this day, Tor Hultmann, is also tour leader on Active Peace Travel, as well as museum guide and board leader of the "Friends of Arkivet". Tor adapted his tour guiding to make it a very special experience for our Ukrainian visitors, and he made the history come alive as it included part of his own family who suffered in this place during the 2nd World War. And Tor also strongly believes that current politics can be transformed thanks to consciousness about history, meetings and discussions with groups of pupils in the local schools and colleges.

After this 3 hour visit in Kristiansand, we drove the distance of 120 km to Risoer city, in direction of Oslo. Here we had a night in a local Highway motel. At 10am we were received by Bjoern Arntzen, son of Helga Arntzen (founder and ideological leader) of Active Peace Travel.
A short visit of the house and greetings with colleagues. In total there is a staff of 14 who is full time employed in the administration, plus about 90 part-time independent colleagues who work as tour leaders when schools are doing their programs.
Usually one week to Germany and Poland on a bus, visiting the cities of Berlin and Krakow, and also the former German KZ camps Auschwitz, Sachsenhausen and Ravensbrück.
Bjoern let us use the meeting room, and made a short presentation of the company vision and activity with Norwegian youth. Thereafter Nadiia and Serhii complemented each other in a briefing about School of Peace in Kharkiv and their concept of future cooperation. The presentation also included discussion on how to improve international cooperation (English written platforms etc), and network building.

After being invited for a lunch, we drove back to Kristiansand, took the Color Line ferry to Hirtshals in Denmark.
Upon a short overnight in Aalborg, we returned next morning to stay in Kiel. In the afternoon there were time for a sightseeing to Laboe, the old German Navy Memorial from both 1st and 2nd World Wars.
For our Ukrainian friends, It was impressive but with mixed feeling to walk on this spot with a strong symbolic dark past. In Ukraine younger generations have heard stories from their own families, from veterans and in school, on how the Nazis mercilessly killed and destroyed multiple communities in Ukraine during World War II. These years of war, political extremities and genocide in Europe (Norway and Ukraine included), connect our common memory and motivation to engage ourselves with the youth for peace making. It concerns also a special responsibility for the UN veterans among us. We have in mind how international Organizations as UN and NATO have reconciled with the way Germany after the war took lesson from the past, and that Germany today is a role model among stable democracies in the world. 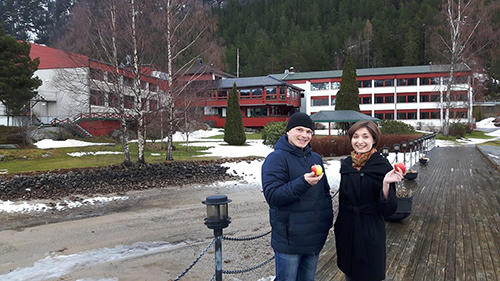 A special thanks to Active Peace Travel by Helga and Bjoern for having welcomed and supported our stay at their facilities. In total, our visits in Kristiansand, Byglandsfjord and Risoer, have given insight to a Norwegian model in implementation of Human Rights and Peace theory, specifically by the travel concepts to Germany, Poland and Geneve.

Now, being inspired, we're looking forward for the next step in our cooperation for a common peace project.